(Chapter 1 can be read beginning here.)

There were a lot of things about the world of Against Stupidity that I didn’t really know when I started, like the exact layout of the house. I was getting tired of keeping it all in my head so I drew a map.

This has rendered some of the drawings from chapter one inaccurate, but that’s just the way it goes. Specifically, the scenes at the staircase would be in the Northeast there, and that’s a little off. Then the hallway scenes above that on the second floor have an inaccurate placement of the balcony. But otherwise it’s good.

And this is just something that I knew was going to happen, since I started posting these before everything was fully formed, and I’m fine with that.

By the time I had drawn the cover, I was really itching to start publicizing this comic and telling this story. Part of me wanted to wait until I was totally finished preparing the art, and the story, and the characters, and scripts in advance for the whole arc. But I knew that if I waited for that I’d never get started. So I just got started. I didn’t always know where I was going with things, but, doing one a week, had time to figure it out. Now that I’m firmly rooted in the universe the next arc is going to go much more smoothly.

Hopefully I can get the updates to 1.5 times a week. They go a lot faster when they aren’t big set-pieces. I think, around the house at least, I’ve set the scene for a lot of the rooms, so those will be lighter on the art. So for those of you who’ve whined about the schedule, take heart!

Speaking of which–reception has been very positive, so thanks! Although some jackasses keep giving me one-star ratings on Webtoons, which is mean. (If you have an account there and want to help counteract that, or even feel like signing up to give me a rating (you just click through with google/facebook/etc.), much obliged!)

And now, some background.

In April, I was sitting in a cafe in Hanoi reading something or other, and started reminiscing about the webcomic I used to draw. Not the comic itself, but rather the fact of having a comic to draw and share. Obviously the power to remedy this was all mine, so I asked for a basic Wacom drawing tablet for my birthday.

The next and harder step was coming up with what to draw. I had no particular stories that wanted to be told. I was already working on a novel (I still am, but it’s almost done), with another on the back burner, and I wasn’t going to be drawing those. I thought about doing a story with the universe of my old webcomic, but that wasn’t really clicking with me either. In the meantime I tried to do a drawing a day to get back up to speed on the craft.

I ended up along the way with a pretty good drawing from the old webcomic’s universe… but no story to tell, there, which is what really matters.

Eventually my daily drawings started to get a little weird. 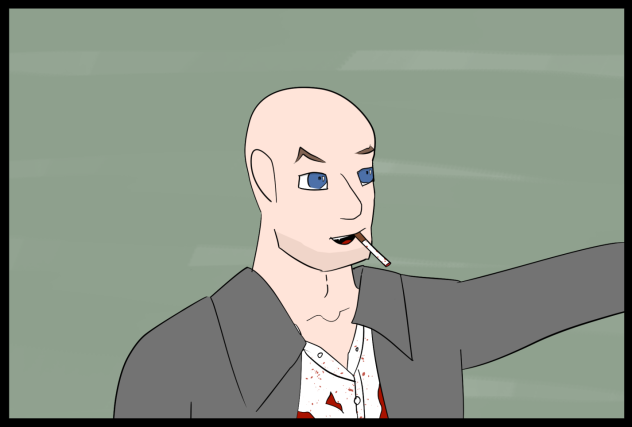 The idea of urban fantasy had lodged itself firmly in my brain at this point. I’d been meaning to do something in the genre, and in fact the back burner novel is in it, so I figured, why not a comic too? One workday, before I left home, I stumbled on the Schiller quote Against stupidity, the gods themselves contend in vain, and on the bus ride to the train station that morning, the broad strokes of the comic formed in my head. So I started to draw the cover.

Meanwhile, I smacked the idea around with a trusted confidant, who was and remains a very great help in executing this story. (Big thanks to him! And to everybody else who helps from time to time!) I fleshed out the universe and the general arc of the story. My stories tend to be a combination of absurdism, bureaucratic incompetence, and Very Bad Things, with a humorous bent, and this would turn out to be no exception.

So, thanks everybody for reading, and I hope you enjoy chapter two, which starts next week. And by all means, feel free to ask any questions you may have about Against Stupidity in the comments!